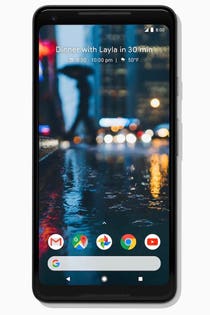 Pixel 2 XL: Google can easily lay claim to one of the world’s best smartphones.

The Google Pixel 2 XL gets better with time and newer builds.

Background: I’ve been using the Pixel 2 XL and iPhone X for almost eight months. The Pixel 2 XL is, for all intents and purposes, pretty close to a perfect phone. Even edging out the X.

The principal thing holding the Pixel back was the display. But more on that below.

Display — improved: Google and LG, the OLED display supplier, apparently have ironed out the display issues that existed on the early builds. The build I’m using now (dated late January 2018) has a better display: colors* are no longer muted, they’re deeper, more vibrant than the build I got back in November. In short, it now feels like the high-quality OLED display that Google should have had at the beginning.

And the blue tint (as seen from an angle) isn’t an issue now (at least not for me).

Android on Pixel — better than iOS: Until Google’s Pixel phones (I’ve used both generations), Android didn’t have the fit and finish of the iPhone/iOS. But Android married with the Pixel 2 XL is so fluid and fast that I prefer it now to the iPhone X.

Camera — vs. iPhone X: no need to rehash this. Suffice to say, the Pixel 2 XL’s still camera is a little better than the iPhone X’s (though it lacks the iPhone X’s 2X optical zoom lens). Apple has a leg up on video (e.g., more robust optical image stabilization). But overall there’s nothing new to report here after eight months that hasn’t already been covered in numerous reviews, i.e., there is pretty much parity between the two phones.

Size — big but not too big: The 6-inch Pixel 2 XL is Google’s largest phone. Compared to the 5.8-inch iPhone X, the XL’s display is taller and wider. That’s a godsend for me because I like to use a big phone as a stand-in for my iPad. The upshot is, I prefer the XL to the X because of the bigger screen combined with its buttery-smooth operation. Also note that the bezels are small (unlike the 5-inch Pixel 2).

Biometric ID (face and fingerprint ID): The rear fingerprint reader works well for me. Compared to the iPhone X’s Face ID, the XL is faster and it can ID me from any position, i.e., I don’t need to bring the phone up to my face. The iPhone X is Apple’s first attempt at facial recognition. I would prefer the option for Touch ID until Apple upgrades Face ID to recognize me faster and from different (e.g., oblique) angles.

AI: This isn’t breaking news but Google Assistant on the Pixel is superior to Apple’s Siri. I don’t use Google Assistant or Siri very much but if you do, go with the Pixel. Google has invested more resources in AI (and for a longer time) than Apple and it shows.

Overall/wrap-up:  The Pixel 2 XL’s display improvement (described above) rounds out and completes the XL, turning it into the best smartphone I’ve used to date: aesthetically pleasing, fast, easy-in-the-hand, and the ultimate phone for running Android.

Other upsides: the Pixel is the best pure Android experience, the XL is incredibly fast (zero lag), has a gorgeous display (on the later builds), a camera that’s the iPhone X’s equal, and feels great for a big phone in the hand.

*The display itself is better, irrespective of software tweaks such as the “saturated” switch in the advanced settings.